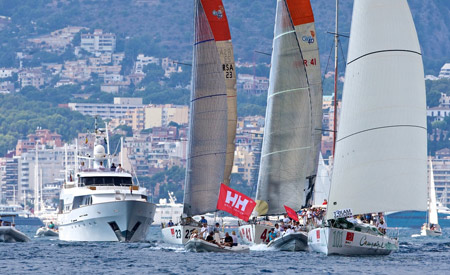 On Sunday 25th September the six double-handed Class 40’s in the Global Ocean Race 2011-2012 fleet crossed the starting line in Palma, Majorca with the first leg, a 7,000 mile trip to Cape Town, South Africa, ahead.

A large audience gathered for the start and the light breezy conditions. Round the world yachtswoman, Dee Caffari, let go the dock lines and the hundred or so boats in the spectator fleet fell into holding pattern observing the fleet heading out of Palma Bay.

The fleet has 450 miles of sailing before reaching Gibraltar. After passing through the straits the next turning mark is the Fastnet Marine Insurance Scoring Gate at the Brazilian island of Fernando de Noronha.

The early part of the race was very tiring and frustrating, playing light winds bingo,’ reported Nannini on Monday morning. ‘Everyone was trying to get away from the island of Mallorca and into the offshore wind, all very close to each other, but sometimes sailing completely different angles,’ he explains. ‘We had a lucky break at some stage and overtook first BSL, then Campagne de France and Cessna Citation, technically taking the overall lead before grinding to a halt.’
Although their time at the front of the fleet was short lived: ‘BSL and Phesheya from the back went off to the M25 motorway and found some wind and circled us like we were stuck in a central London traffic jam.’ 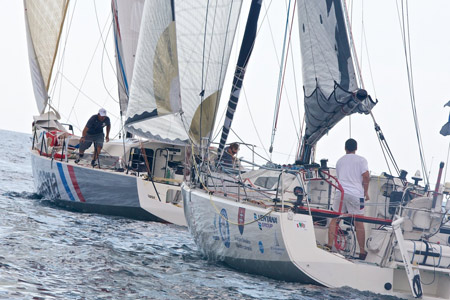 You can follow all the race action via the Global Ocean Race website. Their race tracker gives live updates of wind conditions and competitor locations along with expert opinion as to how they should progress.